While gambling is generally considered illegal in the State of California, except in limited circumstances such as casinos on Indian lands, gaming fraud is a more serious gambling offense because the player has no chance of winning and is effectively being conned.

Under Penal Code 332 PC, it is a crime in California to obtain money through any form of gaming fraud. If convicted of this crime, you could face thousands of dollars in fines and up to three years in prison. 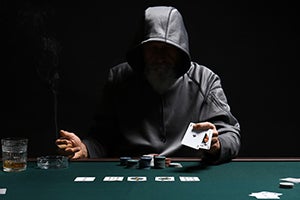 It's a crime under Penal Code 332 PC to obtain someone's money through gaming fraud.

Put simply, it is a crime to fraudulently obtain another person's money or property through card games or tricks, betting or gambling, or fortune-telling.

Of note is that this statute does not prohibit gambling or bookmaking. Instead, it prohibits stacked decks, card tricks, or any other scheme to deceive people into betting on an alleged safe bet or sure winner.

PC 332 says, “(a) Every person who by the game of “three card monte,” so-called, or any other game, device, sleight of hand, pretensions to fortune telling, trick, or other means, by use of cards or other implements or instruments, or while betting on sides or hands of any play or game, fraudulently obtains from another person money or property… shall be punished by fine and imprisonment as in the case of larceny of property of like value for the first offense.”

Subsection (b) says that the term “fraudulently obtains” includes cheating or gaining an unfair advantage for any player in any game by using a technique or device not sanctioned by the game rules.

Subsection (c) says that for the purposes of establishing the value of the property, poker chips, tokens, or markers have the monetary value assigned to them by the players in any game. Let's review this state law in more detail below.

California Penal Code 332 PC is a crime involving obtaining money or property through fraud while engaging in any game or wagering on an outcome.

The law identifies explicitly "gaming fraud" as fraudulently obtaining money from people by convincing them to bet on any of the following types of activities:

Under PC 332, "fraudulently obtaining" effectively means cheating, meaning gaining an unfair advantage for any player in any game “through a technique or device not sanctioned by the rules of the game."

EXAMPLE 1: George poses as a street entertainer playing the "shell game," such as hiding a ball under one of three shells and having bystanders guess where the ball is.

Rather than play the game for entertainment purposes, he convinces a person to bet money on the outcome while using sleight-of-hand to ensure the person never guesses the correct shell. As a result, George can be charged under PC 332.

EXAMPLE 2: While pretending to be a professional tarot reader, Rachel uses her knowledge of the cards and false predictions to convince people to pay her for consulting services.

She can be charged under PC 332 because she is deliberately using tarot reading as a con artist under the pretense of fortune-telling to defraud victims of their money.

Not if the person attempts to act as a "genuine" fortune-teller. If they are operating under a belief system in which they fully believe they're predicting that person's future, that activity is protected by free speech.

If, however, they are only pretending to tell someone's fortune and taking money for it, without a disclaimer such as "for entertainment purposes only,” that constitutes the "pretense of fortune-telling," which is a crime under PC 332 because the victim believes the fortune-teller is genuine.

Several California offenses are related to Penal Code 332 PC gaming fraud, such as the following:

What Are the Penalties for PC 332?

The crime of obtaining money by gaming fraud is a "wobbler," meaning it can be charged as a misdemeanor or felony offense. The penalties for conviction are effectively the same as for misdemeanor petty theft or felony grand theft:

What Are the Defenses Against PC 332?

The penalties could be significant if you face California Penal Code 332 PC charges.

However, depending on the circumstances of your case, your California criminal defense attorney can put forth several strong defenses that could result in the dismissal of the charges or reduced penalties if successful.

Some of the common defenses against gaming fraud charges are discussed below. 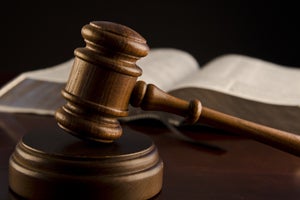 Perhaps we can argue that you had no intent to defraud. Prosecutors must show that you intended to defraud the victim, meaning you deliberately acted with bad faith or dishonestly. If you can demonstrate that you did not have the intent to defraud your accuser, then charges may be dropped.

Perhaps we can argue that you were entrapped. This defense argues that law enforcement officers, typically undercover, induced you to violate Penal Code 332 PC, which would not have occurred without their influence. If this can be proven in court, the charges may be dismissed.

Perhaps we can argue that you were operating within your free speech rights. This defense applies explicitly to the "pretense of fortune-telling."

Your attorney might get the charges dropped by presenting evidence that you were genuinely attempting to tell the future, which is protected by free speech even if money changed hands.

Perhaps we can negotiate with the prosecutor prefiling and persuade them not to file formal criminal charges in the first place, known as a “DA reject.”

You can contact us for an initial case consultation via phone or the contact form. Eisner Gorin is based in Los Angeles, CA.