Penal Code 33410 PC - Possession of a Silencer in California

A silencer is an attachment to a firearm that mutes or reduces the sound of the fired gun. In keeping with California's strict gun laws, silencers are illegal in the state.

In fact, according to Penal Code 33410 PC, not only is it illegal to use a silencer on a gun—it's a felony crime even to possess a silencer. 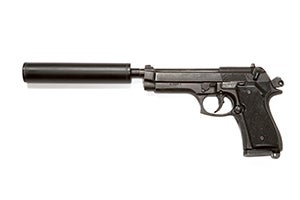 It's a felony crime under Penal Code 33410 PC to have possession of a silencer.

If convicted of this crime, you could face up to 3 years in prison with a felony on your criminal record, but the judge could impose only formal felony probation.

Simply put, silencers are illegal in California, and PC 33410 PC makes it a criminal offense for a person, firm, or corporation to have one.

As noted, a “silencer” is a device that reduces the sound of a gun when it's fired. The “possession” of a silencer typically means that someone is holding it or has immediate access to it.

Of note is that this statute only applies to the possession of silencers. It does not apply to other objects that could be used with a pistol or other firearm.

This information can be crucial for a defense lawyer as it might be a valid legal defense for someone accused to show the prosecution that while their client had an object, it was not an illegal silencer. Let's review this state law in greater detail below.

California Penal Code 33410 PC says, “Any person, firm, or corporation who within this state possesses a silencer is guilty of a felony and upon conviction thereof shall be punished by imprisonment pursuant to subdivision (h) of Section 1170 or by a fine not to exceed ten thousand dollars ($10,000), or by both that fine and imprisonment.”

Of particular note, this law forbids individuals from possessing a silencer and firms and corporations—making it illegal for private security firms to possess or use silencers, for example.

As noted, under California law, "possession" refers to having the object either on your person or under your immediate control, meaning you have direct access to it.

It's also worth noting that no firearm needs to be associated with the silencer for you to be charged with a crime, nor does the silencer have to fit any particular weapon under your control. Simply possessing the silencer itself is a crime apart from anything else.

EXAMPLE 1: John has a Concealed Carry Weapons (CCW) license and is carrying a pistol in compliance with the law.

He purchases a silencer online and attaches it to his pistol. While John is legally authorized to carry the firearm, he can still be charged under PC 33410 for possessing a silencer.

Possessing a silencer is a felony offense.

EXAMPLE 2: Brad is traveling through the State of California with several silencers in his backpack (no weapons), which he is delivering to a friend in another state.

If caught with the silencers, he can be charged with a crime for violating PC 33410, although no firearms are associated with them.

EXAMPLE 3: A security firm in California is hired to patrol a factory. The firm provides guns with silencers to its enforcement officers so they don't alarm the surrounding neighborhood if they are fired.

This firm can be charged under PC 33410 for possessing silencers—and technically, so can any officers who carry guns with silencers.

What Are the Exceptions?

Under California Penal Code 33415 PC, the following are exempt from prosecution under PC 33410 for possessing silencers:

What Are the Related Gun Laws?

There are some gun-related crimes to possessing a silencer under Penal Code 33410 PC, including the following:

Possession of a silencer is a felony offense in California. If convicted, depending on the circumstances, you could face 16 months, two years, or three years in state prison, along with a fine of up to $10,000.

A judge may consider mitigating circumstances and impose formal probation instead of a prison sentence.

Despite the severe penalties possible for violating PC 33410, a good California criminal defense lawyer may be able to implement one of several defenses to combat the charges. The common defenses are discussed below.

Perhaps we can argue that the object in question was not a silencer. PC 33410 only applies to silencers, not to other legal attachments. Your attorney may show that your attachment was something different than a silencer (e.g., a scope).

Perhaps we can argue that you qualify for one of the abovementioned exemptions. For example, if you can show that you were a peace officer authorized to possess a silencer or work for a firm contracted to sell silencers to the military, you cannot be convicted of this crime.

Perhaps we can argue that you did not know you had a silencer. For example, if someone shoved a silencer into your luggage without your knowledge, or if you did not know the attachment someone asked you to hold was a silencer, your attorney can use this information to defend against the charge.

Perhaps we can argue that there was an Illegal search and seizure. The police must have probable cause to search you or your possessions.

If your attorney can show the police acted improperly in the discovery of the silencer, the resulting evidence may be excluded from trial and the case dismissed.

Perhaps we can negotiate prefiling with the prosecutor not to file formal criminal charges in the first place, called a “DA reject.”

You can contact our law firm for an initial case review by phone or using the contact form. Eisner Gorin LLP is located in Los Angeles, CA.