While many existing laws make it a crime to cause harm to someone else, the state of California specifically makes it a crime to do so based on a person's race, gender, sexual orientation, disability, religion, or other characteristics. These are referred to as "hate crimes" under California law. 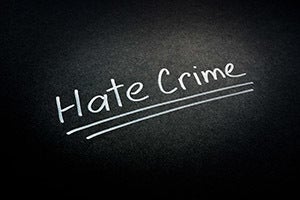 California Penal Code 422.6(a) says it is illegal to use force or threat of force to “willfully injure, intimidate, interfere with, oppress, or threaten someone in the free exercise or enjoyment of any right or privilege secured to them by the constitution or laws of California or the United States Constitution.”

In other words, under law, a criminal act committed against someone motivated by prejudice against specific characteristics of that person is considered a hate crime.

Under PC 422.6, a crime committed in whole or in part due to the characteristics within these protected categories could be deemed as a hate crime. The phrase “in whole or in part” means an unlawful bias against the victim doesn't have to be the only motivating factor.

For instance, suppose it was determined you committed an assault and battery on someone who was motivated, partly because of the victim's race but was also motivated by their conduct.  You could be convicted of the underlying crime and a hate crime motivated by racial prejudice in this scenario. Our Los Angeles criminal defense attorneys will discuss this topic further below.

What Is a Hate Crime in California?

California's hate crime statute is embodied in California Penal Code 422.6 and 422.55 PC. Generally speaking, these laws make it a crime to deprive someone of their civil rights based on any of the following actual or perceived characteristics:

Further, according to Penal Code 422.6(b) PC, it's a hate crime to “knowingly deface, damage, or destroy the real or personal property of someone person for the purpose of intimidating or interfering with the free exercise of their rights.” PC 422.6 elaborates on specific actions that would constitute a hate crime against a person, including:

One of the unique aspects of California's hate crime law is that it does not require that the victim actually possess one of the protected characteristics—they only need to be perceived to have them. So, for example, if you attack someone because you think they are gay, even if they are not, you can still be charged with a hate crime.

The related offenses for hate crimes, meaning laws a prosecutor could charge in addition to, or instead of, the underlying offense, include Penal Code 240 PC assault, Penal Code 242 PC battery, and Penal Code 302 PC disturbing a religious meeting.

What Are Similar Federal Offenses?

Violating someone's civil rights is also prohibited under federal law, such as:

A hate crime in and of itself is a misdemeanor offense under California law. If you are convicted of a hate-related crime, you could face any/all of the following:

If the defendant committed a felony hate crime, they could receive an additional one, two, or three years in state prison. The judge could also impose more severe fines.

What Are the Enhanced Hate Crime Penalties?

In addition to being charged as a standalone hate crime, there are certain situations where you can face enhanced penalties if prosecutors can establish that a specific crime you've been charged with was hate-related.

For example, if you are convicted of making criminal threats, Penal Code 422 PC, and the victim was targeted because of their perceived race, gender, or sexual orientation, you could face additional fines or jail time beyond what you would have received for making the same criminal threats for any other reason.

If you're convicted of this misdemeanor offense that also meets the definition of a hate crime, you could face an additional year in prison plus fines up to $10,000. Depending on the circumstances, the prosecution may also upgrade the enhancement to a felony, which could result in more severe penalties.

Penal Code 422.75 PC covers felony interference with civil rights. If you're convicted of this felony offense that also meets the definition of a hate crime, you could face up to 3 additional years in prison for the same offense. You could also be convicted of a felony hate crime of interfering with another's civil rights resulting in first-degree murder under Penal Code 190.03 PC.

What Are the Defenses for Hate Crimes Charges?

You might have committed the crime (or you might not), but even if you did, it doesn't meet the criteria of a hate crime if it wasn't committed due to ill will over the person's gender, race, sexual orientation, religion, etc. Other defenses against hate crimes charges are discussed below.

We might be able to negotiate with the prosecuting agency to reduce or dismiss the charge. Also, through a process known as prefiling intervention, we could potentially convince the prosecutor from filing formal criminal charges before the first court date, called a “DA reject.”

Eisner Gorin LLP is based in Los Angeles County and serves people across Southern California. You can contact us for an initial case consultation by calling (877) 781-1570 or filling out our contact form.